THE LIEUTENANT GOVERNOR OF SASKATCHEWAN

His Honour the Honourable Russ Mirasty
Lieutenant Governor of Saskatchewan

Russ Mirasty was born and raised in La Ronge, Saskatchewan and is a member of the Lac La Ronge Indian Band.  His first language is Woodland Cree.  His grandparents led a traditional life, fishing, hunting and trapping.  His mother modelled a strong work ethic, and from her and his grandparents, he learned to value a connection to the land, and the importance of hospitality and community service.

Mr. Mirasty joined the Royal Canadian Mounted Police (RCMP) in 1976, and was one of only two Indigenous cadets in his troop. He served in various roles across the country, including as Director General of National Aboriginal Policing Services and as Commanding Officer of “F” Division (Saskatchewan).

Over his 36-year career, Mr. Mirasty was posted to seven provinces, performed duties in every province and territory, and participated in an exchange with the Northern Territory Police Service in Australia. He retired from the RCMP as Assistant Commissioner in 2013.

Following his retirement, Mr. Mirasty continued to devote himself to the residents of Saskatchewan by helping lead the Student First Engagement process. The valuable perspectives shared during the process informed the development of a province-wide education strategy.

Mr. Mirasty served as a member of the League of Educational Administrators, Directors and Superintendents, and as a board member on the Community Safety Knowledge Alliance.  He was appointed to Saskatchewan’s Advisory Group on Poverty Reduction, and served on the board of the McDowell Foundation, which supports research, inquiry, and sharing of information for the K to 12 education system.

In recognition of his outstanding contributions, Mr. Mirasty received both the Queen’s Golden Jubilee and Diamond Jubilee Medals, as well as the Meritorious Service Medal.

His Honour leads a very active lifestyle and regularly participates in running and cross-country skiing marathon events.  He and his wife, Donna Mirasty, have a home in La Ronge, and they have two children and two grandchildren.

--photo and bio courtesy of the Lieutenant Governor's website

The Qu'Appelle Gallery, located in the Saskatchewan Legislative Building, is a display of portraits of former Saskatchewan Lieutenant Governors.

Sadly, the Legislative Building has eliminated this gallery from their tour, nor can this magnificent display of artwork be viewed any longer online.

THE VICE-REGAL STANDARD OF THE LIEUTENANT GOVERNOR OF SASKATCHEWAN

Since 1980, a series of new personal standards has been approved by the Governor General which bears the shield of arms of the Province, circled with ten gold maple leaves representing the ten provinces and surmounted by a royal crown, on a field of blue. This design had been agreed upon at a lieutenant governors' conference and each Province requested in turn that the design be authorized by the Governor General. Quebec and Nova Scotia have not adopted the new design.

The standard is never lowered to half-mast. On the death of a lieutenant governor, the standard is taken down, until a successor is sworn in.

"Above all the political strife and turmoil, there is the Crown.  It works."
-- Fredrick W. Johnson, former Saskatchewan Lieutenant Governor 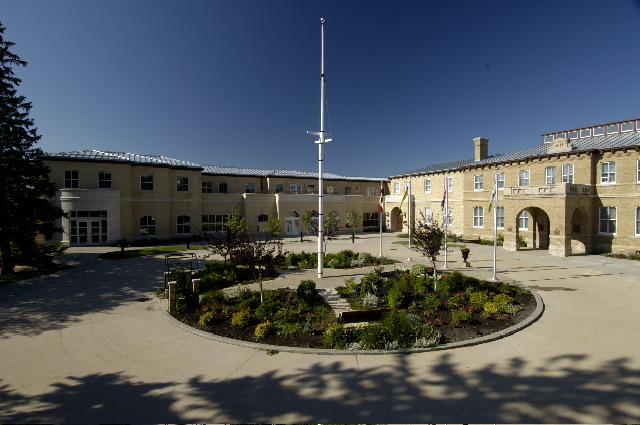 (Photo courtesy of Mark Greschner from Artec Photographic Design)
This elegant mansion served as the residence and office of the Lieutenant Governors of the Northwest Territories, a vast 2.5 million square mile territory given to the newly formed country of Canada in 1869. Government House was designed by Dominion architect Thomas Fuller and built between 1889 and 1891.  Nine Lieutenant Governors lived in the house until it was closed in 1945.  Government House then became a veteran's hospital, then later a school.  After exstensive renovations, the Lieutenant Governor's office was moved back to the historic landmark of Government House from Hotel Saskatchewan in 1984.  In May 2005, the Queen Elizabeth II wing was opened (left in the image above) by HM the Queen.  The old section (right in the photo above and below) was renamed the Queen Victoria wing.

**The Lieutenant Governor's office is at the far right.

It is played at the opening of the Saskatchewan Legislative Assembly, military march-pasts and other events attended by the Lieutenant Governor. Because it is a salute, the audience does not sing either of the abbreviated anthems when the Vice-Regal Salute is played. It is played when the Vice Regal Party reaches the dias in the case of ceremonial functions and when they reach thier seat in the case of other events.

The Vice-Regal Salute is composed of the first six bars of the Royal Anthem, "God Save The Queen", followed by a short version (the first four and the last four bars) of the National Anthem, "O Canada".

The Vice-Regal Salute was approved by Her Majesty The Queen in 1968.

Click here to listen to the Vice Regal Salute on canada.ca

The Lieutenant Governor gives Royal Assent in Her Majesty's name to all measures and bills passed by the Legislative Assembly, except on the rare occasions when "reservation" is considered necessary. The Lieutenant Governor also signs Orders-in-Council, Proclamations, and many other official documents providing them with the force of law.

In addition to the Lieutenant Governor's constitutional role, His or Her Honour and spouse annually undertake hundreds of ceremonial, official and community functions to fulfil their Vice-Regal responsibilities.

Because of the constitutional position as head of the Executive Government of the Province, the Lieutenant Governor is not involved in political activity. This apolitical position permits him or her to represent Saskatchewan on ceremonial and state occasions.

The Lieutenant Governor of Saskatchewan attends many dinners, cultural events, military and civilian ceremonies, opens buildings and conferences, address gatherings of various kinds, visits schools, community events, and military establishments. Travel is an essential activity of the Lieutenant Governor, and it is by means of visits throughout Saskatchewan, that provides the opportunity to gain extensive knowledge of the province, and the people they serve.

Their Honours travel to every part of the province, meeting the people of Saskatchewan where they live, work and go to school. The Lieutenant Governor speaks to audiences of all ages and interests about the strengths and values we share as citizens wherever we live - in the rural area, the vast northern region or the provincial capital.

On occasion, the Lieutenant Governor may be invited to lend patronage to organizations, particularly those of a charitable nature. Usually patronage will not be given unless the organization has been in existence for at least five years, serves a broad section of the population, is provincial in scope, and is in secure financial condition. Patronage is not granted as a matter of routine.

The extension of patronage to a wide variety of activities contributes to the enrichment of the lives of the people of Saskatchewan of all ages, lending the dignity and prestige of the Office to worthwhile causes.

The Lieutenant Governor of Saskatchewan and spouse are hosts to members of the Royal Family, the Governor General, visiting Heads of State, and other dignitaries on official visits to the province. They also extend hospitality to many persons from Saskatchewan, other parts of Canada, and abroad.

Their Honours offer hospitality at Government House to a diverse cross-section of the Saskatchewan people, numerous charitable and community organizations, and visitors to the province. The Lieutenant Governor continues the tradition of hosting the New Year's Day levees for the public, judiciary, military, clergy and consular corps.

Each year at ceremonies in Government House, and elsewhere in the province, the Lieutenant Governor presents a number of awards for bravery, for outstanding public service, and for achievement.

His or Her Honour presents Lieutenant Governor's Awards recognizing achievements by Saskatchewan people in a wide range of endeavours, including the Saskatchewan Order of Merit which s/he serves as Chancellor, and presents other honours and awards on behalf of other organizations throughout the province to deserving citizens.

The Constitution and the Lieutenant Governor?

The Offices of the Monarch, Governor General, and Lieutenant Governor are entrenched in the Canadian Constitution, and no changes can be made to the Offices without the unanimous approval of all Provincial Legislative Assemblies, along with the Senate and the House of Commons in Ottawa.

Canada has a parliamentary form of government, with a constitutional monarchy. It's based on the British parliamentary model, but has been adapted to suit our own needs. Canada's Constitution recognizes The Queen as our Head of State, representing the totality of the sovereign powers of the country, which includes both the federal and provincial governments.

The Crown symbolizes the unity of the people and helps maintain our distinctiveness as Canadians. The U.S. has a republican form of government, quite unlike our parliamentary system.
VICE REGAL LINKS
Governor General of Canada
Lieutenant Governor of Saskatchewan
Government House
Government House Foundation